Continued from some previous bliss with other Swiss…

From Bern, we took the train to Chur, the closest train station to the hamlet of Ober-Says where my cousin Andreas and his wife Simone lived. Andreas had come to visit his (and my) Uncle Jeff over two different summers, so we had gotten to know each other then. However, while I knew hypothetically that Jeff and his family were Swiss, my only interactions with both Jeff and Andreas had only ever been in Manitoba, so I couldn’t actually imagine seeing Andreas at home in Switzerland. Furthermore, the last time I had seen Andreas was not only the summer of my & Josh’s wedding (so we were already a bit preoccupied), but it was also during their holiday to Canada that summer that Simone, only six months pregnant, had gone into labour and ended up giving birth to their second son in the backseat of my aunt’s car in the middle of rural Manitoba and had to spend the next three months caring for her son in hospital. Therefore, the last time I had seen Andreas and Simone, there hadn’t really been a lot of time for hanging out together!

As a result, we really had no idea what to expect when we stepped off the train. What we got was two blonde tow-headed Swiss boys hurtling towards us with fistfuls of waving Canada flags, and hugely welcoming hugs from Andreas and Simone. 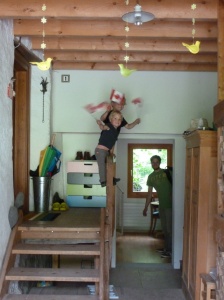 They asked us how long we planned to stay, and we proposed three days, but when they hesitated, we hastily assured them we could leave earlier if three days was too much. “Well, we have this whole week off and then we were going to take you to Simone’s family’s place this weekend as well, but if you have to leave earlier than we don’t want to keep you…”

Hosts that want you to stay longer? We would never say no to that!

With our week-long stay confirmed, they got down to business. Spreading out a map of Switzerland on the table between us, our hosts extraordinaires proceeded to plot out all possible destinations and activities for our “programme” together. 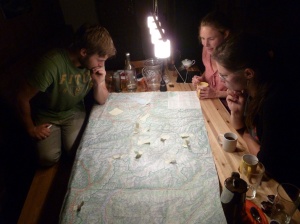 Hang on to your hats… It was a packed week, and we have the pictures to prove it! 🙂 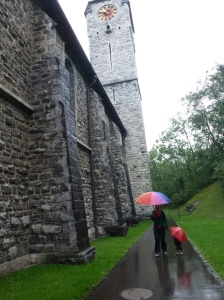 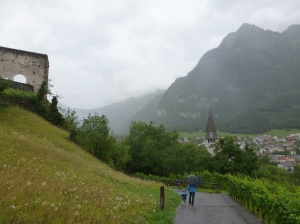 The Bodensee (finally seeing it for ourselves after hearing about it from so many Bodenseehof alum!) 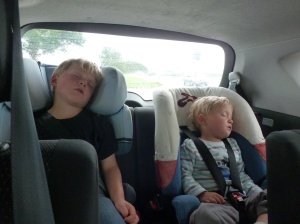 Dinner with Simone’s sister Andrea in quaint Appenzell (ps. Andreas – where is my beer?! :P) 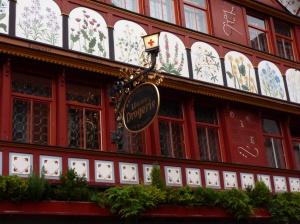 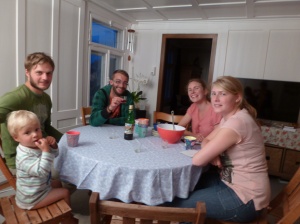 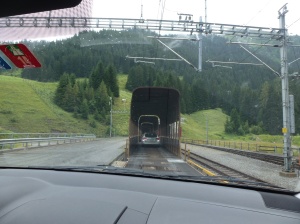 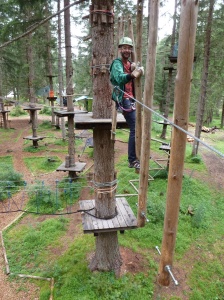 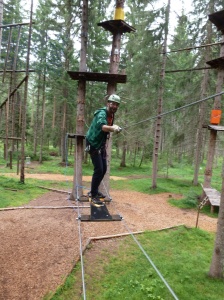 Snowball fights in July as we passed over the mountain on the way back! 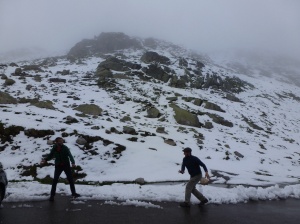 The Great Canadian Breakfast (where our hosts proceeded to write down every single Canadian breakfast food they could think of, then looked at the list and mused, “Maybe we will need to invite another family to help eat.”) 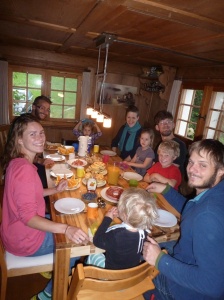 Roadtrip to Italian Switzerland in search of sunshine! 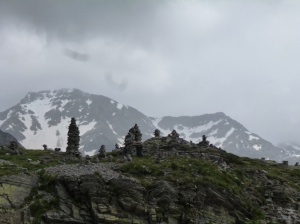 Ruk-Shuk (thanks to Simone for introducing us to this truly awesome Canadian game!) 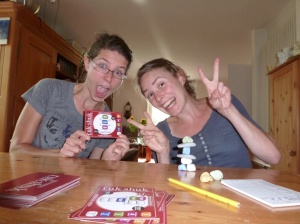 Schwingen/Hoselupf aka Swiss German wrestling pants (apparently it’s a thing… I plan to ask Uncle Jeff for a demonstration! :P) 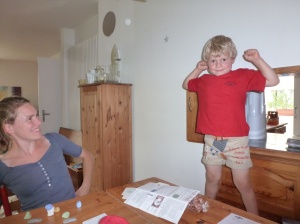 A beautiful little walk turned deluge! (Josh & I seem to attract flash floods on this trip…)

Ps. Dankeschön to Elizabeth for the towels and clothes dryer!!

The best way to learn a language: hang out with 3-year olds (they are always excited to name farm animals and colours, and only judge you a little bit when you can’t count to 10)

Andreas, Simone, Aric, & Gabriel: You have redefined the meaning of “hospitality” for us.

for an incredibly fun, beautiful, relaxing, and entertaining week. We cannot wait to host you in Winnipeg next time! 🙂 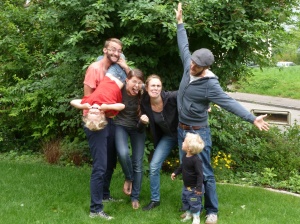 We received our iPad just before going to Argentina, and it has been our faithful travel companion ever since. It was on this little screen that we saw our niece for the first time (after hiking six hours down a mountain to find wifi on a semi-weekly basis… Two weeks overdue, seriously, kiddo?!); 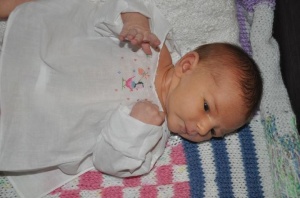 that Josh applied for Education from an Argentine campground (and was accepted!);

that a Mennonite frantically tried to learn Cree as his train chugged towards the Northern school at which he was expected to teach it; 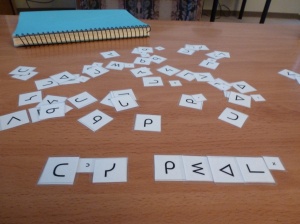 and of course, it was on this little screen that this very blog was born.

Now, halfway across the world in a different direction, our little iPad has remained faithful in keeping us connected with our lives back home and in being the bearer of some very exciting news. In May, in a campground outside of Rome, it was on this iPad that I opened the email that would change the direction of my life yet again: 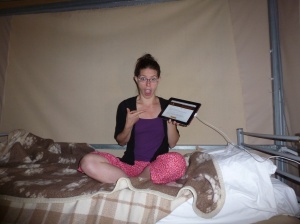 Going into Medicine has been a dream of mine for many years. I am beyond thrilled to not only have the chance to study Medicine, but also to study it in the Bilingual Stream, which will allow me to continue pursuing my passion for the French language and the French community that has become an incredible part of my life!

I received the email around midnight, so all the buses going into town had stopped running. Therefore, we celebrated my future career in Medicine by running across the highway and going to McDonald’s for celebratory McNuggets. I figured I didn’t need to worry about being a good role model for healthy eating practices until I was actually IN med school 😉 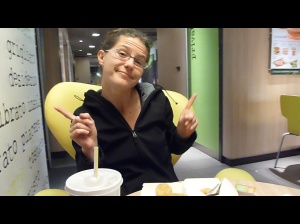 After receiving my acceptance in May, I had a few blissful weeks free of any obligations. Finally, however, the magnitude of paperwork caught up to me. In early July, I spent an entire day in my cousin’s office in a tiny hamlet of Switzerland downloading, printing, filling out, scanning, and finally coaxing an ancient fax machine to send all the forms required for my admission. I am frankly astounded that the forms actually sent properly… I don’t know if the College of Physicians & Surgeons of Manitoba have ever received an enrollment package from Ober-Says, Switzerland!

During this trip, Josh’s path has also meandered along some new adventures! In May, Mr. B officially graduated with his B.Ed. Although we were in Köln, Germany at the time of his convocation, his wonderful Ed friends made sure to include him in their celebrations: 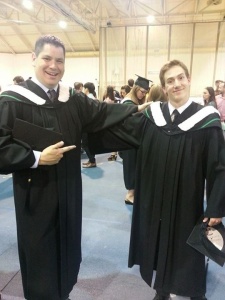 In June, we were living in a London flat with Josh’s family during their annual trek to England. One Sunday evening, Josh received an email describing a possible job opportunity for the fall. He excitedly emailed back, but the next day, we went to Glastonbury for the night, so we were without Internet for one day. ONE DAY… which was apparently enough time for the principal of the school to request an interview with Josh! Arriving home that night to a pile of emails, we panicked that he had missed his chance. However, thanks to a convenient time difference and some speedy Skype-calls, Josh got ahold of the school, who reassured him that it wasn’t too late, his interview could be moved to the next day.

Fantastic… Except that the next day, we had tickets to see Charlie and the Chocolate Factory at London’s West End. So, we brought the iPad and during the show, Josh snuck out of the theatre and ended up doing his interview in the theatre bar over Skype. Only at one point did his potential employer ask Josh if there was a marching band in the background. Unconventional, perhaps – but, that very evening, there was a job offer in his inbox, so unconventional seemed to have worked!!

A huge thank-you to Laura for faithfully checking our mail back at home, M.O.M. for being willing to sign and drop off all Sara’s crazy forms, Andreas and Simone for letting Sara commandeer their office all day and then (trying to) explain to their workplace why two Canadians had to use the fax machine for an hour, Gwen and Leanne U. for being the most persistent emailers, the Dixons for the 3G, the bartender at Royal Drury Lane Theatre for not batting an eyelash during Josh’s interview, Margaret Park School for being so flexible (note from Josh: I’m so excited to join you this fall!)… And to all of our amazing friends and family, back in Winnipeg or here in Europe, who cheer us on in our crazy, unconventional, ridiculous adventures. We love you guys and love sharing our life with you! 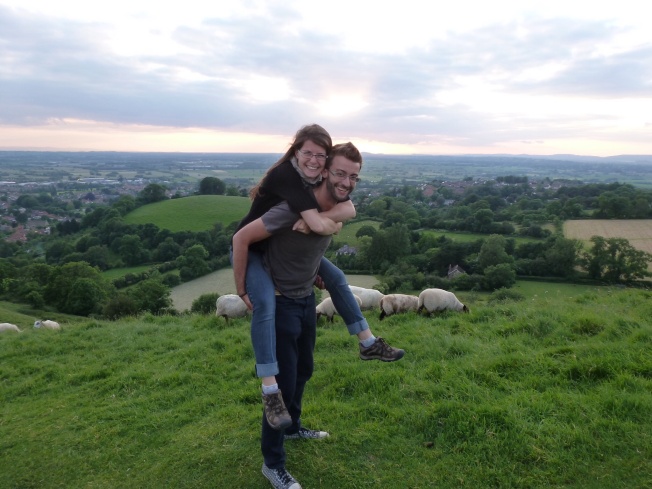