*Baracoesa phrase, literally: “I shredded myself like a leaf.” Hard to explain to a non-Cuban, but this is a very colloquial phrase meaning that one enjoyed oneself a lot at a party.

As we groggily stumbled off our night bus, we were slapped by a sensation we hadn’t felt since arriving in Cuba a week earlier: The hint of a breeze. Make no mistake, it was probably still +30°C at 6:30AM, but there was a freshness in the air, the sweetness of ocean salt that soothed our parched lungs. We clambered into the bicitaxi our host had reserved for us and creakily made our way through the sleepy streets of Baracoa.

Cuba’s capital of cocoa, Baracoa is a misty, beguiling city that meanders along the coast and invites one to slow down, dig your toes into the silky black sand beaches, squint against the sun melting into El Yunque. In other words, the perfect place to calm one’s soul after the exhausting marble brightness of the inexhaustible Santiago.

Side note: This was Christopher Columbus’ landing point after sailing for months into the inky unknown, and I found it interesting that even at the very cradle of Columbus’ entry to the Americas, it was marked by only one small statue and zero fanfare. And yet it seems an unavoidable topic in the States, cropping up continuously in textbooks, monuments, and even a national holiday. Perhaps more Northern Americans should take their cue from the people living where history actually took place, and realize that this topic does not deserve the relevance it currently enjoys. And now moving on… 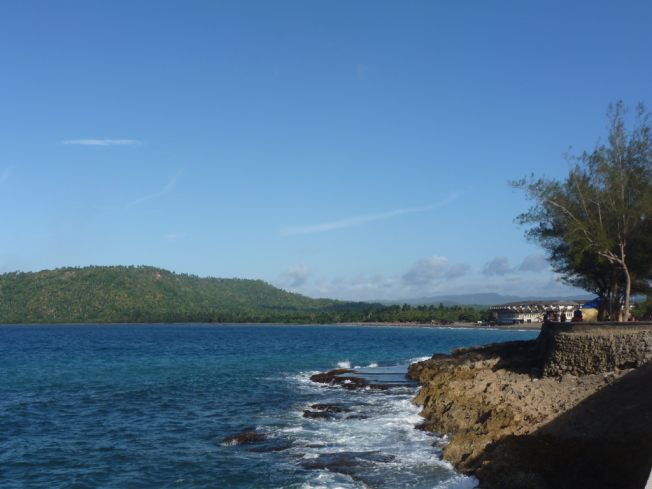 Our days in Baracoa took on a lovely languid quality. Only a ten minute walk from our casa was a delicious black sand beach sprawling the entire length of town. If you followed the beach to the tip of accessible land, you reached a turquoise lagoon, on the other side of which we were promised was hiding a tiny white sand beach. At this point, you had a choice. You could wind your way through the palm woods and eventually come to a bridge of shaky single planks stretching to connect to the outstretched fingertip of the fishing village across the bay. Or, you could strike up a conversation with a fisherman who then offers to row you across the lagoon in his tiny boat.

We opted for the latter.

Since our mysterious fisherman was nowhere to be found on our return trip, we meandered through the village and crossed via the bridge, which was in itself an adventure: That evening at dinner, our friendly waiter not only delivered excellent service, but also a proposal: “You can’t get to know Baracoa if you stay in town,” he insisted. “I can get a car and take you into the mountains to see beautiful natural lakes… And La Reina de Cacao.” Now he had our attention. We couldn’t visit Cuba’s cocoa capital without meeting the Queen of Cocoa, could we?

So, bright and early the next morning, we met back at the restaurant and piled into a cab with Félix and Yolis, our newfound Baracoeses tour guides. The day was spent rowing through canyons to discover freshwater pools hidden deep in the mountains, feasting on fresh seafood caught that afternoon by Félix’s buddy, and, yes – visiting La Reina de Cacao in her kingdom.

La Boca de Yumurí: According to historical tradition, the Guamá people jumped off the canyon shouting, “Yo moriré!” (I will die!) rather than succumb to Spanish colonial rule. Centuries later, the canyon and river are still known as “Yumuri” in their honour. 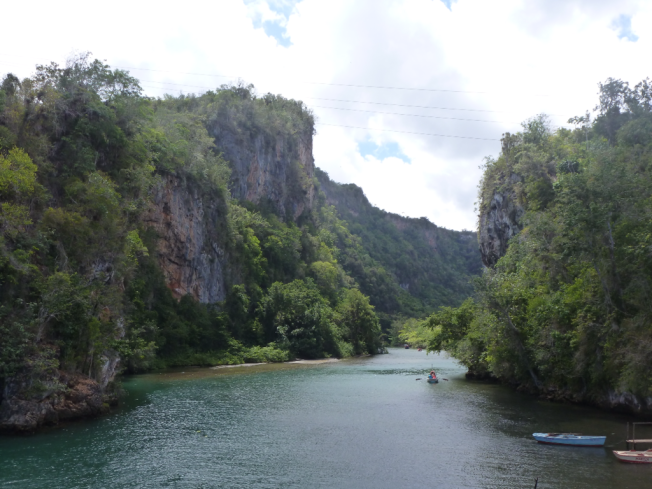 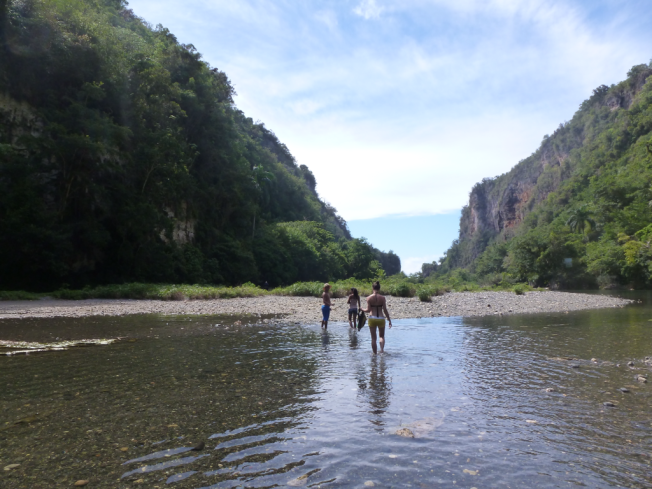 Josh making friends with our lunch

Young cocoa plants (looking NOTHING like we had imagined!) When Félix and Yolis realized our fifth wedding anniversary was the next day, they insisted that we ring in the occasion by dancing until midnight. 12:00 found us at La Terraza, Baracoa’s one and only night club, salsa-ing to “Ah-ah-ah-ah… Hasta que se seque el Malecón” (one of Cuba’s five essential songs) and toasting the beginning of five years of marital adventures with Cuba Libres and our newfound Baracoeses amigos.

And as per usual, the adventures would just keep on coming… 🙂